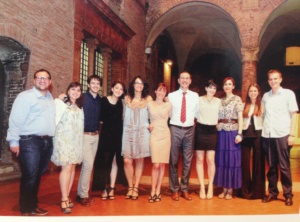 Research has been / is being conducted at RN by many people since 2001 (the side picture was made at EuCNC 2014, which we organised in Bologna: the best group I have ever had – according to what they wrote in the rear of the picture).

Office located in main building:
take the stairs from the main hall,
up to the second floor;
take the corridor, then
first door on the right hand side:
call on the phone 93817.